Ah, yes, heading from Durango, Colorado to Moab, Utah. Driving along, still making up funny stories about many of the things we saw. We got into a conversation about Mesa Verde National Park, which had not made it to our list of things we would do on this trip. We talked about how it should have made our list since everyone we encountered had raved, telling us to stop there. How it was too bad we had not taken the time to determine exactly where it was or how to get there. Decided that next trip, we would definitely add Mesa Verde to our list. Started making up stories again as we drove.

Not 3 minutes later, literally, there is a sign that says the next exit is for the entrance to Mesa Verde National Park. We took the exit, spending the rest of the day lost in the cliff dwellings. 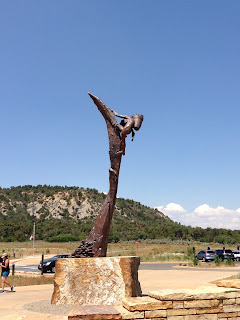 Statue of a climbing cliff dweller at the entrance to the park. 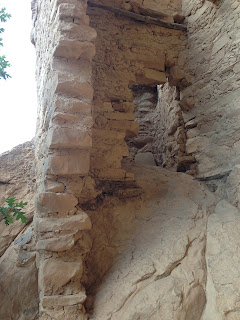 Close up of the entrance to the cliff dwelling. That entry hole is pretty small! 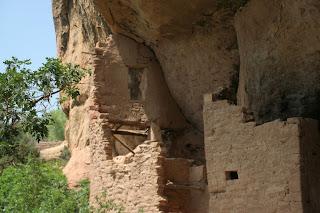 I am amazed at how these were constructed. 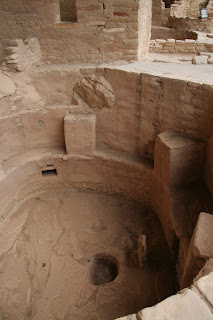 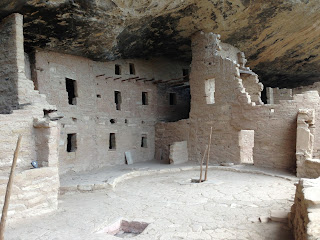 Can you imagine actually living in here? 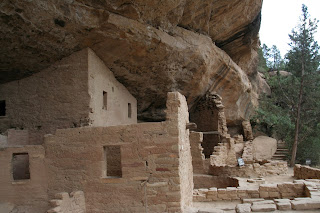 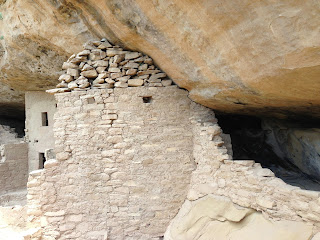 The uppper cliff wall seems to press down.

I'm so glad we took the time to stop at Mesa Verde. And remember the guy who slept through most of the train ride in Durango? As we walked out from the cliff dwelling, we ran into him and his wife! They had not planned to go to Mesa Verde either, but decided to go on the spur of the moment, just like we had done.

Headed out of the park and on to Moab. It was late when we got there, thankful for the day and the pizza delivery guy.
Posted by auntie-c at 1:06 PM

auntie-c
A deep faith, a little quirky, a joy in friends, a love of the Man, that me in a very small nutshell. Here's life as it happens in our little corner of the world where there are a lot of these things... knitting, photography, movies, prayer, wine and more... mixed in the the ongoing battles with depression and dementia. Grab a cup of coffee and stay a while.